Our resident grumpy old git - Eric Silbermann - is back for one more race preview this season and there is a much bigger issue behind his grumpiness this week... 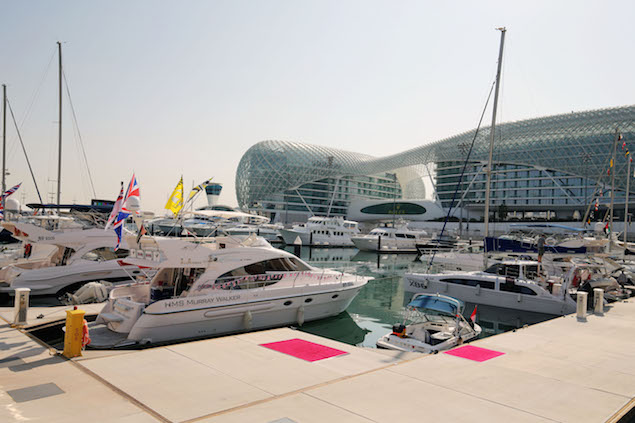 Where to begin? There’s so little to say about Abu Dhabi that I actually think the person who invented the expression, “it’s a bit meh” must have come from here. You could describe the place as vanilla, but nothing stays white here for long, coated as it is with a thin layer of beige sand.

Apparently, some folk come here on holiday – “ooh we do like a bit of winter sun,” they say, picking it as the nearest destination to Europe that has guaranteed warm weather and isn’t a war zone, but is far cheaper than the Indian Ocean or the Caribbean. But wait, it gets better, according to a tourism guide to the Gulf, this is a nice place, except that, “it lacks the buzz of Dubai.” In UK terms, that’s like saying somewhere lacks the broad vistas and wide open spaces of Dagenham.

Ah, but it’s all about the racing I hear you say. Well it would be if the Mercedes Panzers hadn’t annihilated the opposition as long ago as Sochi, although we do have a thrilling contest for fourth place honours, between Kimi Raikkonen and Valtteri Bottas, so it’s not so much a grand finale and more of a grand Finnale. (sorry but I’m not about to waste good puns on Abu Dhabi.) Personally, I’m not too bothered about title fights, preferring to enjoy each race for what it is and the Abu Dhabi race is…an excuse to lie in bed in the morning because of its late start. 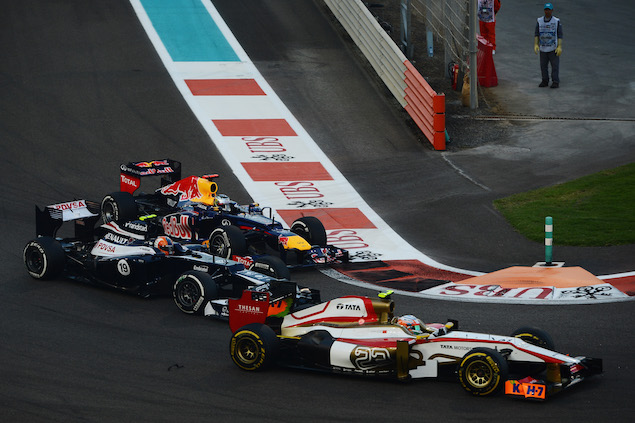 I will begrudgingly accept that, despite the unpromising layout, we’ve occasionally had some entertaining Sundays here: take the 2012 race for example, when Sebastian Vettel had to keep his title hopes alive against Fernando Alonso. Seb did what he had to do, coming from the back of the field to third at the finish, hitting just about every other car on track, to the extent he needed more nose jobs than Daniela Westbrook. Two years earlier, the race wasn’t brilliant, but it had great comedy value, as Ferrari strategists were so obsessed with covering Fernando Alonso’s most obvious championship rival, Mark Webber, that they failed to notice Sebastian Vettel winning the title. Not since David Coulthard found himself stuck behind the hugely talented Enrique Bernoldi for an entire afternoon in Monaco have we witnessed a funnier example of overtakingitis.

Yas Marina deserves it’s place on the calendar, because the folk who run it care about motor racing, they put on a good show and they get bums on seats while they pay the sport’s promoter a handsome sum for the privilege. Now, if we were living in a parallel universe where sport was seen as something noble and traditions were worth upholding, then the promoter would tell the people at the Nurburgring, Magny Cours, Monza, Silverstone and so forth, “good news chaps, the Gulf states are throwing so much money my way, I can charge you less, to ensure your survival, while I will still make enough cash to guarantee I will continue to be rich beyond the dreams of actresses.” That’s why I’m uncomfortable here or in Singapore, because I feel I’m being unfaithful to more deserving venues that have been priced out of the F1 hosting market. 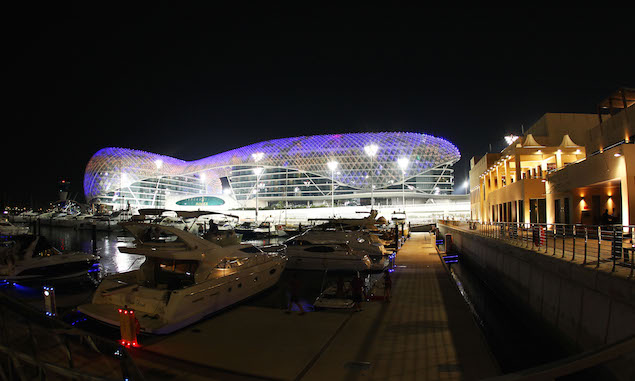 With so much money on Yas Island this weekend, the paddock will be swarming with marketing types like flies round s**t and along with the usual talk of “tyre deg, clean air, splash ‘n dash, it’s on fire again, ballast blocks, try gap, monkey seat, Y 250 Vortex,” the slick marketeers will be filling the air with their own take on the English language, banging on about “leverage, deliverables, going forward, your cyber bandwidth is bleeding edge, we’ve got Metrics for user interfaces and we can repurpose your package dynamically, not forgetting penetrating the customer vertically.”

As for the twilight format, it does nothing for me and when you look at the track in the cold light of day, it’s like the moment they turn the lights on in a nightclub and you realise all the stuff that seemed cool in the dark looks simply tacky in daylight. The floodlights also mean it’s time to look at the wretched change-colour Viceroy Hotel. Last year, we booked ourselves rooms there on a well known hotel booking site, at a price you’d pay in a British seaside resort Bed ‘n Breakfast over the winter. Once the hotel management realised it had lost an opportunity to fleece much wealthier mugs, the cheeky blighters cancelled our reservation. We kicked up a stink so they ended up giving us a free stay in a swanky hotel in town with a hire car thrown in.

However, there is one overriding reason for my grumpiness, namely the fact this is the last Grand Prix for just under four months and, although I don’t want this to spread, I do actually quite like the whole motor racing thing. Who’d have thought it…

Unfinished business: the scores still to be settled in Abu Dhabi

Click here for exclusive pictures of the Ferrari power unit

Between the lines at the Abu Dhabi Grand Prix