Ferrari's tech boss Mattia Binotto is confident that when the time comes, Sebastian Vettel will renew his allegiance with the Scuderia for 2018.

Vettel is leading the red squad's charge this year as it undermines the dominance of arch-rival Mercedes and finds itself leading the race to the 2017 world title.

The German driver has won three races so far this season but pundits still aren't convinced he will remain in Maranello when his contract expires at the end of the year should Mercedes table a lucrative offer.

Binotto begs to differ however and believes Vettel will renew his contract with Ferrari before the scheduled early September deadline decided by chairman Sergio Marchionne.

"Vettel is not only one of our drivers, he is a multi world champion," Binotto told La Gazetta dello Sport.

"I think he will stay with us. Why? Because there is nothing more beautiful for a Formula 1 driver than to win with the reds."

Binotto said Vettel's most recent win, in Monaco, was a turning point for the fabled Italian team, which has not won a title for a decade.

"It was 16 years since Ferrari had won in the Principality, so I think victory was a liberation.

"It was a victory that made us realise we have a fast car and we can now compete on par. Or prove to be even stronger than the others," he added.

As for Vettel, the German will undoubtedly play his cards close to his chest in the coming months. But for now, the four-time world champion is avoiding contract discussions.

"I have decided with my team not to talk about contracts right now, but instead to focus entirely on the title race," the 29-year-old told Sport Bild.

Gallery: All the pictures from Sunday in Monaco 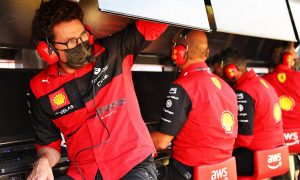 Mekies: Team orders discussed more outside Ferrari than inside