F1i technical expert Nicolas Carpentiers takes you under the skin of this year’s Formula One power units with exclusive images. First chapter in our series: Renault. 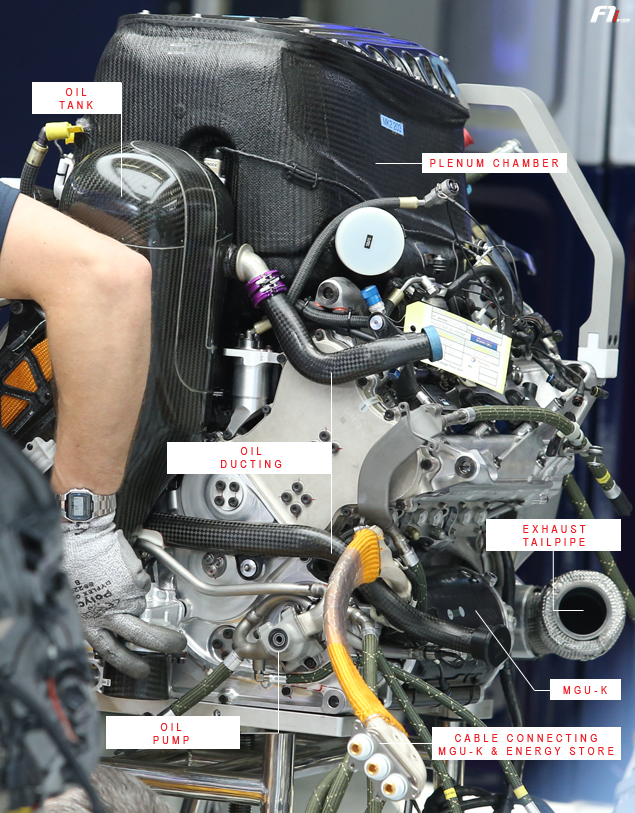 Renault has kept its fairly conventional power unit design on its Energy F1-2015, i.e the compressor is placed side by side with the turbine. Basically, a turbocharger comprises of three main elements: the turbine, the compressor, and a shaft to link them both. The turbine is positioned in the exhaust gas stream, which makes it spin at high-speed. The device is also connected to a compressor that sits below the engine intake. The said compressor sucks up and compresses ambient air, which still needs to be cooled down before being channelled towards the cylinders.

The turbocharger forms a compact assembly at the back of the French power unit. As shown on the picture above, the front of the engine is devoid of any component involved in the charging process. This is a stark contrast to Mercedes’ split-turbo installation that has the compressor placed at the front, while the turbine is positioned at the rear (see comparison below).

Only the oil tank is attached to the front of the French hybrid power unit, with oil being extracted from the lower tube.

Renault's approach is a stark contrast to Mercedes’ split-turbo installation that has the compressor placed at the front, while the turbine is positioned at the rear

On the right-hand side of the picture, at the bottom of the engine, lies the MGU-K, which recovers kinetic energy under braking. The device extends into the oil pump, while one can also spot the orange three-phase electric cable that connects the MGU-K to the energy store.

The MGU-H, which absorbs power from the turbine shaft to convert heat energy from the exhaust gasses, is not visible on the images because it sits within the two rows of cylinders of the V6. 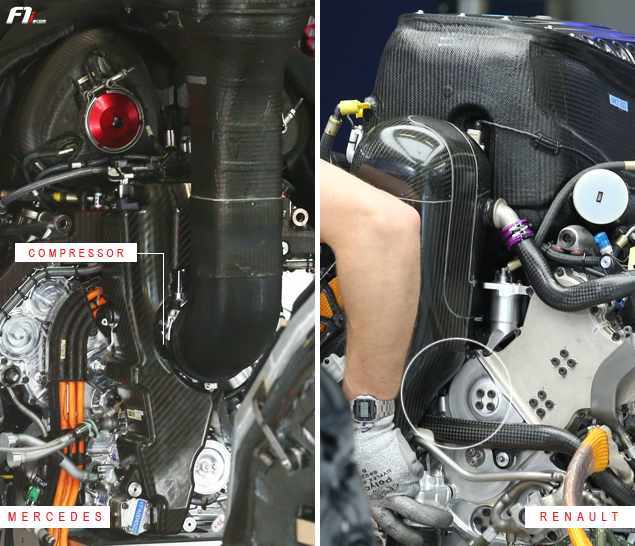 Alex Lynn exclusive: Staying grounded in pursuit of the dream