They say you shouldn’t talk with your mouth full, but Eric Silbermann risks the wrath of Mrs Manners by having breakfast – at 4pm in Singapore - with a pot-pourri of paddock people. 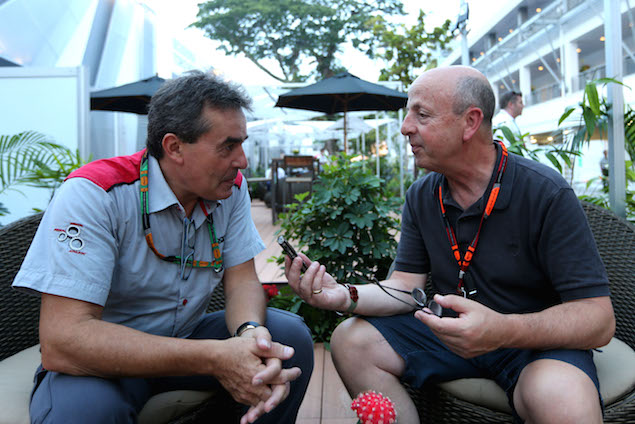 Just as the late Professor Sid Watkins was known in the paddock simply as “The Prof,” so too, Dr. Riccardo Ceccarelli is just known as “The Doctor”. The Italian runs a firm called Formula 1 Medicine, which provides care to a large part of the paddock with two doctors attending every race from the start to the finish of a race weekend.

How many years have you been in F1?

Twenty-seven seasons. As a kid, I wanted to drive go-karts but my family said no chance, too dangerous. So I waited until I was 18 and I found myself racing against Ivan Capelli. We became good friends, in the meantime I became a doctor and when he started in Formula 1, he asked me to work with him, to support him so that was the start of it all.

What better topic to kick off our chat with a doctor than illegal drugs! I remember, when I used to work in rallying, in the days when the drivers wouldn’t sleep for 72 hours, they would get all sorts of strange medicines. I once asked a Finnish Lancia driver, “what does the medicine do?” He said, “You know the really narrow road on Stage 5? In my eyes, it looks as wide as an autostrada.” Would there be any performance-enhancing drugs that would make a Formula 1 driver drive better?

I have a question for you: legally or illegally?

There is one medicine that is the real, real effective doping for the drivers, which is the amphetamine

I can say many things without saying anything. There is one medicine that is the real, real effective doping for the drivers, which is the amphetamine. The amphetamine makes the brain much more active. It’s like making an engine go from 300km/h to go 400km/h, plus you have more functionality available in the same time so your brain works faster, so that you see your driving in slow motion, so it’s easier to control the car, it’s easier to take a decision, but of course it’s very dangerous and shouldn’t be taken under any circumstances. It’s impossible (to take amphetamines) now because the FIA has introduced doping control. Some rumours, which I cannot say if they are true, say that in the past, in the 80s, some drivers were using amphetamine, but maybe it was in endurance races, the 24 hours events.

With the present system, F1 drivers are subjected to the same doping controls as any other athlete – they have to be available 24 hours, 365 days.

In other sports, athletes might take growth hormones to have more muscle but honestly speaking, what driver would be stupid enough to want bigger muscles when they are always trying to be as light as possible. The other form of check can be made for EPO, another hormone quite common in endurance sport, which increases the number of red cells. EPO has the same effect on an athlete as opening the air restrictor on a Formula 3 car!

Here in Singapore, we stay on European time but the body has a cycle it goes through, so are the drivers 100% or do you believe it has an effect on them, physiologically or psychologically? The human being is conditioned to be awake when there’s sunshine. Are there some negative effects of being awake in the dark or can we overcome them completely here?

First of all, there are two ways to talk. One is with the numbers, one with the feeling and opinions, so now we are in the field of the feelings and opinions because to be sure what we’re talking about we should need to take much data from the driver, like blood tests and the hormone level. We have many hormones and they regulate all our efficiency – brain, muscle, sleeping – everything is regulated by this and they’re not stable during the day, they change and they are influenced by the external factors. 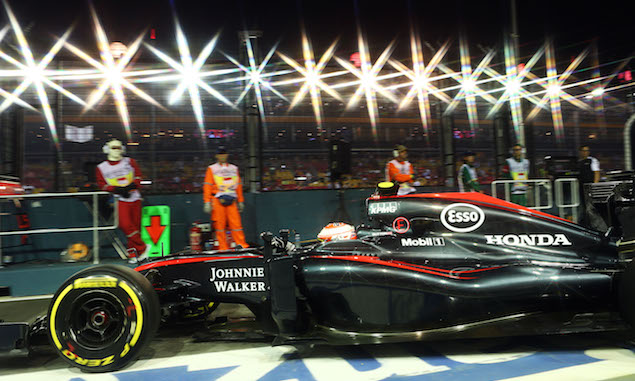 One of these factors is natural light. So obviously, when you try to stay awake during the night and sleep with light, there’s a conflict in the body and for sure you cannot be at 100% and to adapt takes days.

Putting all these factors together, the different time schedule, the very hot temperature, the high humidity, the body cannot be at 100%. Maybe the drivers who adapt best are at 95% of their ability, the others at only 85. OK, the light in the circuit is very good but it’s not like driving with the sun, so you have to try and compensate for that.

Do you mean driver training is not sophisticated enough?

I think motorsport is still a little bit backward – there is not the same attention on the human side as there is on the car.

Exactly. And this is understandable because the car is the most important factor in this sport, which is why you often see team-mates producing almost identical lap times. The real muscle of the driver that can make the difference is not the quadriceps, it’s not the neck, it’s not the arms, it’s the brain and racing drivers dedicate most of their training time only to their muscles and maybe spend a little bit of time with a mental coach or psychologist but it should be the other way round.

They should concentrate more on the brain?

In my clinic, at the moment, we work 50% on the brain, 50% on the muscle but when they do the muscle training, they do neuromuscular activities so during the activity, they have to control the coordination, and stability so there’s also a brain function while they are doing physical work. It’s not like you are sitting on a classic piece of gym equipment where you don't need your brain. 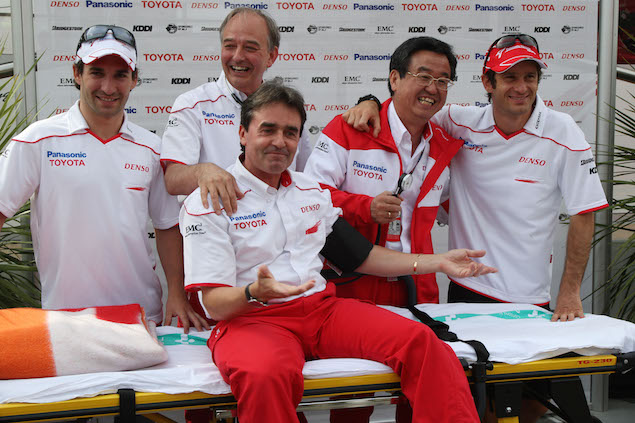 You do something that destabilises them so they have to concentrate?

Exactly. We alternate physical exercise with reaction; you have to skip, to jump, to move, to always be concentrating, so in our experience, in our clinic, I would say, at the end, the training of the brain is 70% and the training of the pure muscle is maybe only 25 or 30% maximum and this for me is the future of Formula 1. If I can allow myself a bit of pride, I would say that in our clinic we are maybe 10 to 20 years ahead of conventional training for drivers.

Are you saying motorsport is a long way behind other sports?

Yes, but it’s to do with the logistics of the sport. A driver might come to a race with a trainer, who also does some mental training and also acts as a doctor and a nutritionist. Because you cannot bring an entire team of experts when you travel the world with all the costs of flights, hotels and so on. It’s a little bit like many years ago on the technical side, when Mauro Forghieri was designing all the parts of the Ferrari, from the engine to the chassis, he was responsible for everything. That was many years ago.

Now you have a specialist for everything on the car and you’re saying it should be the same for humans?

Exactly. So, away from the track, we created a clinic, with all these specialist people always together who don’t go to the races but at least the drivers can have the benefit of this full team when they come to us. We are a company that is always evolving and we start with very young drivers. I would say 30% from karting and many from Formula 4, Formula Renault, Formula 3. We believe this generation will arrive in Formula 1 with the new mentality, the mentality of working on the brain more than on the muscle. You could say we are trying to get close to the amphetamine effect but without amphetamine!

How are you contracted at the Formula 1 races?

At the moment, we are providing a medical service at the races for six Formula 1 teams plus the Pirelli crew and the Philip Morris crew. We have two doctors at the track all weekend to control the medical issues of all the team members, from emergencies to minor matters like a sore throat.

How many people do you think you treat/see on average in a weekend?

The record was 140 and it was after India when it was back to back with Abu Dhabi. We did more than 200 interventions, which means 140 people but sometimes you have to see the same person three or four times.

What’s interesting is that this year, the numbers of people we see has dropped by half compared to last year. You know why? Because last year, the new car, the new rules meant the engineers, the mechanics had to work on a completely new car and power unit and so it was much more stressful, more hours of work and much more on the edge. So we had more problems like lower back pain, cervical pain, tendonitis, and much more infection of the upper respiratory tract.

Stress is the biggest factor.

That’s what we’re trying to communicate to the teams: stress can affect their work a lot so they should attend more carefully to their nutrition because the mechanics are under a big stress.