They say you shouldn’t talk with your mouth full, but Eric Silbermann risks the wrath of Mrs Manners by having breakfast with a pot-pourri of paddock people. 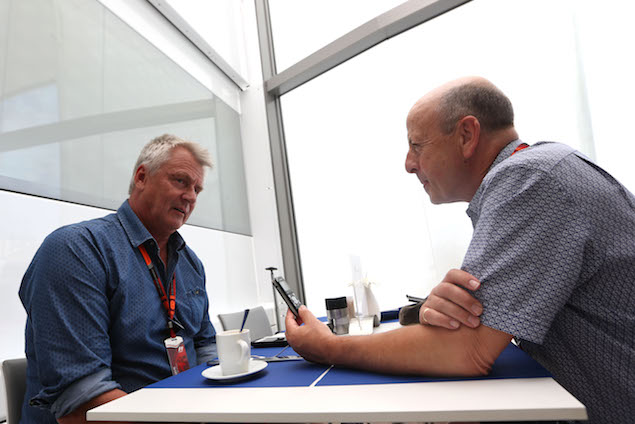 Question: What do you call a dozen F1 Driver Managers buried up to their necks in concrete? Answer: not enough concrete! It’s fair to say that people who earn a healthy living taking 10% of a driver’s salary for apparently doing little more than hanging around the team motorhome every weekend do not have the best of reputations in the paddock. Truth is that these shadowy characters have a greater influence over the ebb and flow of this sport than you’d imagine. On a weekend when Marcus Ericsson was confirmed for a further term at Sauber, I caught up with his manager, the former racer and current TV reporter for Swedish TV, Eje Elgh. But before we get started a quick Elgh history lesson: in the 70s Eje started in karts and Formula Super V, took a second place in the British F3 championship and in ’81 he finished third in Formula 2 series. He was seen as the successor to legendary Swedes Gunnar Nilsson and Ronnie Peterson. However, his route to Formula 1 stalled, although he did have a test with McLaren. But it was to be in sports cars, mainly with Toyota, that he made his name. 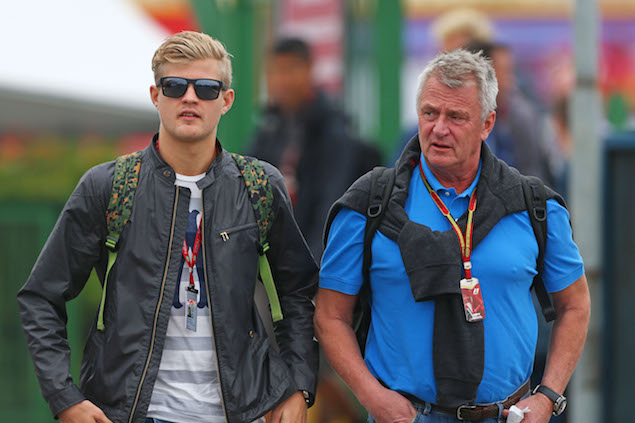 I gather you don’t regard yourself as Ericsson’s manager?

No, because in my world, a Formula 1 manager is the guy who does the deals, the contracts, the personal sponsorship and having a commission out of what the driver earns. But I don’t work like that.

Since I’m now almost as old as you, I am beginning to learn what I am good and bad at. I realised at an early stage that I will never be a successful businessman and as soon as something comes up involving numbers, I take a step back. What I am good at is getting things done and getting people’s trust and I have always tried to be an honest guy. So I just take a flat fee for what I do.

But how did you get into the management game?

With Marcus, me and Kenny Brack (another Swedish racer who won the Indy 500 in 1999) started a project because we were pissed off with Finland being able to produce so many Formula 1 drivers, while we couldn’t in Sweden and we sat down and said, okay, let’s try and create a Swedish Formula 1 driver because there hasn’t been one since Stefan (Johansson) 23 years ago. We started scouting young kids of around 14 and 15 in go-karts, with the aim of finding two guys: we only found one and it was Marcus. We set off to create a sponsorship programme for him to make it all the way up to Formula 1 and we were successful in that. Kenny pulled out of the arrangement a couple of years ago but I was asked to stay on and now we are at his second year in Formula 1 and we’ve just signed for a further year. I am more of an adviser for Marcus, making sure he doesn’t do too many wrong things. 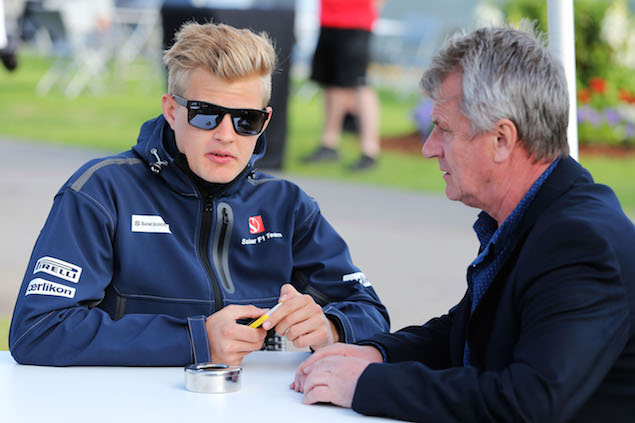 What happened with Swedish drivers? We had the likes of Reine Wissel, Ronnie Peterson, Gunnar Nielsen and then Stefan and then along came a whole load of Finns, but why no Swedish drivers for a long time?

I was in the generation behind Ronnie and Reine along with Stefan. It was a big blow to Sweden when Ronnie died, because he was very very popular and the sport was flourishing. But after he died, we were left with an empty room and no one wanted to touch it. I was lucky that through Ronnie I got Marlboro sponsorship that took me quite a long way in racing. Then Stefan also got backing from Marlboro and he was doing better than I was, so I lost the sponsorship and it got him to Formula 1 where he stayed for quite a long time. But at the end of his career there was no more Marlboro, no money in Sweden, no interest. So me and Kenny decided we were going to have to change this and we did, so that now we can see a big interest with spectators and on television and Formula 1 is becoming popular again in Sweden. That may create a better future for Swedish drivers.

What’s your abiding memory of Ronnie as a person?

I will try and put this in a way that doesn’t offend anyone, because I don’t mean to offend. I think it was very lucky for him that he became a Formula 1 driver because I don’t think he’d have been very successful at much else! Having said that, this doesn’t mean I think he was stupid or anything like that. But he was so devoted to being the fastest on the track and he was such a natural talent that there was nothing to stop him except bad luck or team orders. He was a fantastic driver and for me he was a special person in my life. I was friendly with his family and I am still in very close contact with his daughter of course. He was important in my career, he was important in my life, he will stay important to me until the day I die.

Keke (Rosberg), who I was very close to and indeed still am, would always call me a lazy bastard

Why did your own Formula 1 career never really work?

If you had asked me that question back when I was racing, I would have given you one million excuses. But as you ask me now, a long time after, I will tell you I was not good enough. When I say not good enough, that does not include the ability to drive a race car, because that I could do as good or maybe even better than some people who did make it to Formula 1. But what I didn’t understand was how much of the rest of you has to go into it. I think I had too much focus on keeping my family happy and having a good relationship with people. I didn’t really understand how much hard work was required.

You mean you weren’t good at being a hard bastard…

Exactly. And Keke (Rosberg), who I was very close to and indeed still am, would always call me a lazy bastard. And I’d say, no I’m not lazy, it’s just that I have a different way of doing things. At the time, I didn’t realise that worked against me. I’d rather have a bit of fun when I went out, which wasn’t really the correct way to do it. Having said that, I have no regrets because I then went on to have a fantastic second career in Japan, which taught me a lot of things I’d never have learned otherwise. My time in Japan has moulded my personality for the rest of my life and for my family and everyone around me. I don’t think that would have happened if I’d been in Formula 1 instead. 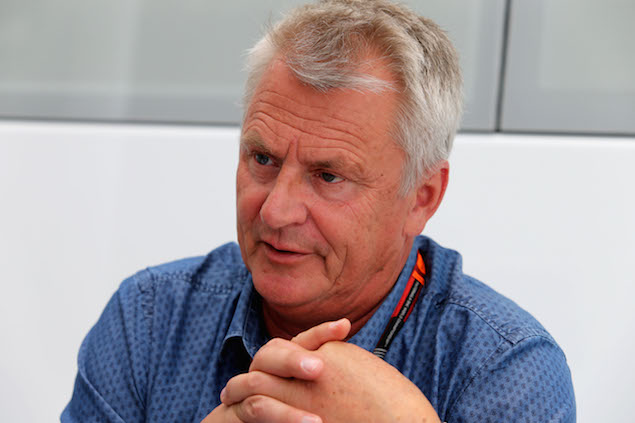 You must have been one of the first Europeans to go racing in Japan. Even today, Japan gives newcomers a bit of culture shock but I imagine back then it must have been even more extreme.

At first it was so depressing. It took me a long time to accept that this was my home now. I thought I’d gone over to Japan for one race and then maybe one other one. It took a long time before I accepted and understood that that was where I was going to do my racing.

How long were you there for?

I stayed eleven years. But after five or six years I was so integrated in the whole thing. As you mention I was one of the first Europeans to go there. It turned out that the hotel I stayed in became the second home of all European racers.

You mean the Hotel President in Tokyo? I used to stay there too. Did you start off with the famous bicycle? (Legend has it that the European racers would pass down the bicycle they used to get around the city to whichever racer came along next.)

Yes, I think I did. We were all there, me, other drivers, engineers, media, so it was a bit like a big football team with everyone staying together. When the new kids came, they were all told “go and see Eje, he’ll know what to do.” So they would come and tell me about a deal they were thinking of doing, “shall I take it?” And I’d say, “no that’s too little, this is what the last guy got, this is what to ask for” and so on. So between us we all controlled the market and I was a bit like the spider in the web. I have very fond memories of Japan.

Why did you start racing in the first place?

When I started go-karting at the age of 12, Ronnie was already my hero as he was so good in go-karts. He hadn't started cars yet and I just wanted to get a go-kart. I got one on my twelfth birthday; my dad had a friend who built one for me. We went off to try it and on the way back home my dad asked me, “how did that go, are you ready to race?” And I was shocked because I’d never expected the question as I never thought I was going to compete, I thought I was just going to have fun. But having had the thing given to me, I said “yes of course.” The following week we went to a race and I won. And it continued from there.

Are you looking at a successor to Marcus Ericsson already?

Yes, there’s another young Swede we are keeping an eye on and supporting. He’s called Gustav Malja, currently racing in the World Series by Renault and he came third in the last race which was actually here at the Hungaroring. We’ll see how he goes.